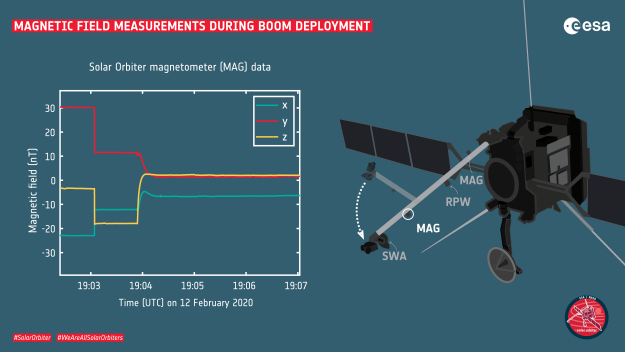 Data collected with the Magnetometer (MAG) instrument during the deployment of the instrument boom of ESA's Solar Orbiter spacecraft show how the magnetic field decreases from the vicinity of the spacecraft to where the instruments are actually deployed.

Solar Orbiter was launched on 10 February 2020 from NASA's Kennedy Space Center in Cape Canaveral, Florida. The magnetometer's two sensors were switched off about 21 hours after liftoff, and the boom deployment took place almost three days after liftoff, on 12 February.

First measurements from MAG, received after the deployment of the high gain antenna on 13 Feburary, show the level of the magnetic field decrease by about one order of magnitude. At first, the data reflected mostly the magnetic field of the spacecraft, whereas at the end of the procedure, scientists got the first glimpse of the significantly weaker magnetic field in the surrounding environment.

Solar Orbiter carries a suite of 10 instruments, comprising in situ and remote-sensing ones, to observe the turbulent solar surface, the Sun's hot outer atmosphere, and changes in the solar wind. Remote-sensing payloads will perform high-resolution imaging of the Sun's atmosphere – the corona – as well as the solar disc. In situ instruments will measure the solar wind and the solar magnetic field in the vicinity of the orbiter.

Solar Orbiter is an ESA-led mission with strong NASA participation. The prime contractor is Airbus Defence and Space in Stevenage, UK.