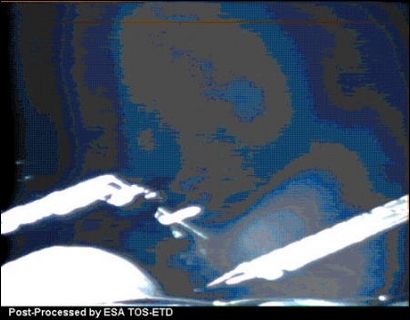 The thruster unit on the service module appears as a protuberance behind the black thermal insulation and it occults part of the edge of the telescope sunshield. This picture shown was taken by IRIS (with an exposure of 14 ms) during the second firing of XMM's thrusters on December 11 at 15:22 CET.

During the firing, the thruster nozzles expel gas at high velocity which develops as a cloud, also called a plume. This is clearly visible in two lobes, of different sizes, one upwards and one slightly to the right.