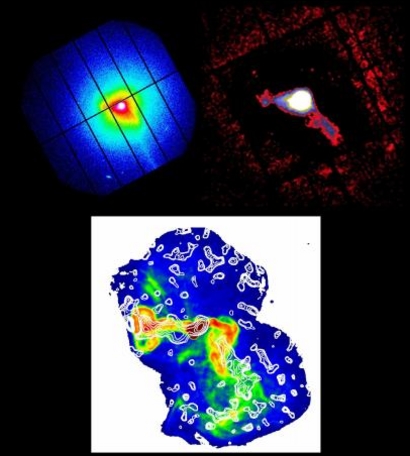 XMM-Newton has provided detailed spectral analysis of the nucleus and jets of the giant elliptical galaxy M87. Observation of this relatively close bright X-ray and radio source situated at the center of the Virgo cluster of galaxies has allowed the first detailed study of the interactions between the thermal and radio emitting plasma in its central region. Top left, EPIC-pn image of M87 in the energy range 0.5-2 keV. The galaxy's X-ray halo has an almost spherically symmetrical appearance, with the exception of two localised enhancements to the SW and E of the nucleus. Image courtesy of H. Bvhringer, Max-Planck Institut f|r extraterrestrische Physik, Garching, Germany. Top right, a combined view by both EPIC MOS cameras shows the asymmetric extended X-ray arms of M87. The galaxy's X-ray halo has been subtracted. Image courtesy of E. Belsole, Service d'Astrophysique, CEA Saclay, France. Bottom, X-ray mean energy level map of M87 provided by the EPIC MOS camera superimposed on a radio map of the galaxy. Image courtesy of E. Belsole, Service d'Astrophysique, CEA Saclay, France.
View »
9-Dec-2022 02:31 UT