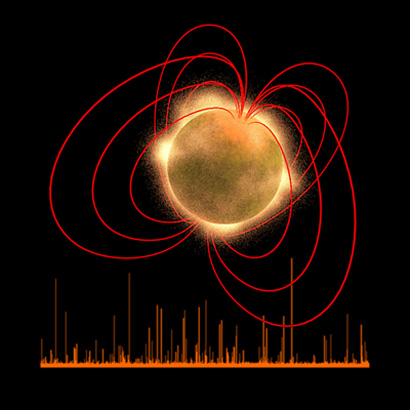 SGR 0501+4516, the first new Soft Gamma repeater in 10 years was observed by XMM-Newton and INTEGRAL as a target of opportunity shortly after it became active in August 2008. Above: An artist's impression of a magnetar. Below: XMM-Newton observations of the magnetar SGR 0501+4516. Magnetar is the name given to two types of high-energy sources: anomalous X-ray pulsars (AXP), and soft gamma repeaters (SGR). First discovered in the X-ray band, these sources are believed to contain an ultra-magnetized neutron star, that is a neutron star with a magnetic field of the order of 1014-1015G.
View »
11-Aug-2022 10:55 UT

At last! After 10 years a new Soft Gamma Repeater is observed