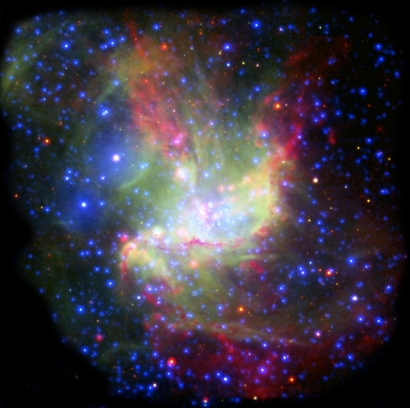 Since the early 1980's star formation regions are known to emit X-rays. Measuring and monitoring the X-ray emission in these regions is important as X-ray emission impacts many of the processes involved in star formation, for example, it stimulates accretion by disk ionization via coupling with magnetic fields, it ionizes the interstellar medium, heats the gas, and modifies its chemistry and the dust grain composition. XMM-Newton has studied a number of star-forming regions including NGC 346, a bright, active star-forming region in the Small Magellanic Cloud (SMC), an irregular dwarf galaxy nearby to our Milky Way.

This multi-wavelength false-colour image of NGC 346 combines X-ray (blue, from XMM-Newton), infrared (red, from Spitzer) and visible light (green, ESO’s NTT). The infrared light shows cold dust, visible light denotes irradiative gas, and X-rays represent hot gas. The features of NGC 346 visible in this combined image demonstrate that stars in this region are being created by two different types of star formation, one radiation based, the other triggered by wind. Red-orange filaments of cold dust surrounding the centre of the image indicate where the intense radiation from the more massive stars provides enough energy to expand the gas and compress the cold dust into new stars. A bubble, seen as a blue halo to the left and located within a large expanding gaseous shell, is believed to be caused by the supernova explosion of a massive star whose strong winds compressed the remaining dust in the parent cloud and formed younger small stars, seen at the top of the image.