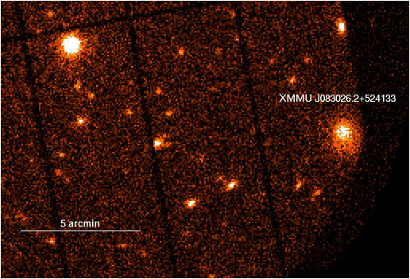 The image, taken by the EPIC camera onboard ESA's XMM-Newton observatory, in which the massive galaxy 2XMM J083026+524133 was discovered. This object, seen here to the right of the image, was captured unexpectedly during an observation of a different XMM-Newton target - an active galaxy, seen here as the bright spot in the upper left.

At the time of the discovery 2XMM J083026+524133 was the most massive galaxy cluster that had been found up to that point in the distant Universe.

XMM-Newton discovery of most massive, distant cluster of galaxies