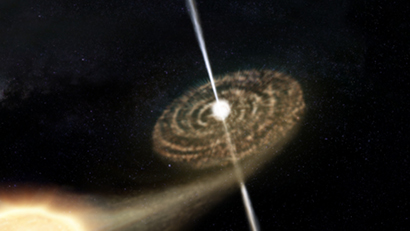 This illustration depicts 4U 0614+091, an exotic binary system composed of two stellar remnants, a neutron star and a white dwarf.

A long-sought-after emission line of oxygen, carrying the imprint of strong gravitational fields, has been discovered in the XMM-Newton spectrum of this system.

Astronomers can use this line to probe extreme gravity effects in the region close to the surface of a neutron star.