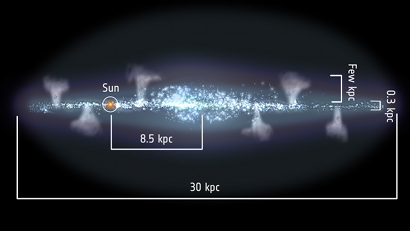 This illustration of the Milky Way shows the galactic fountain scenario: supernova explosions in the galactic disc heat the interstellar medium and can drive hot gas out of the disc, creating so-called galactic fountains that contribute to the formation of a halo of hot gas around the Milky Way. As the gas rises above and below the disc, reaching heights of a few kiloparsecs, it emits radiation and thus becomes cooler, condensing into clouds which then fall back into the disc, in a fashion that resembles a fountain.

The fountains shown in this illustration are purely indicative, as the number of fountains actually present in the Milky Way is not well known.

In this illustration the approximate scale of the galactic fountains is compared to the size of the Galaxy; the approximate location of the Sun is also indicated. Distances are given in kiloparsec (kpc).

New evidence for galactic fountains in the Milky Way