Hubble image of the galaxy cluster 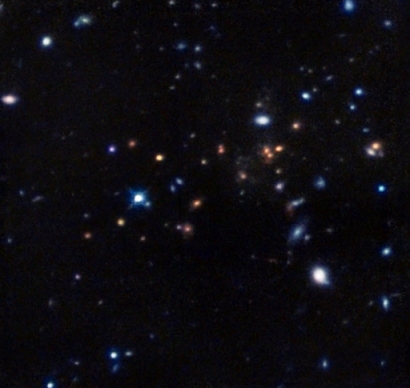 This image shows the galaxies in the galaxy cluster CL J1449+0856 as observed by the NASA/ESA Hubble Space Telescope.

Most of the galaxies exhibit quite compact shapes, consistent with what is expected for galaxies with a bulge dominated by old stars. The fact that the stellar populations in the galaxies had time to evolve is a sign that this structure is a mature cluster, as evidenced also by the diffuse X-ray emission detected by ESA's XMM-Newton.

The image has been taken with NICMOS-3 on board Hubble using one filter only (the F160W band, or H-band); the colours in the image have been added using information from ground-based data.

The region depicted above is about 45 arc minutes on a side.

An old galaxy cluster discovered in the young Universe