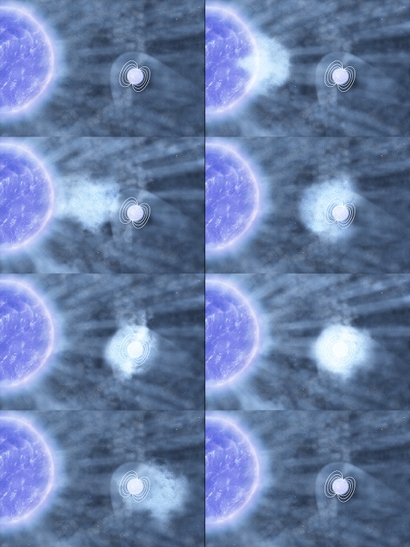 This sequence of images illustrates the ingestion of a clump of matter by the neutron star hosted in the Supergiant Fast X-Ray Transient, IGR J18410-0535. The neutron star is shown, on the right, with the field lines highlighting its intense magnetic field, while the companion, a blue supergiant, is represented as the large star on the left. The relative sizes of the objects displayed in the illustrations are purely indicative; in fact, the radius of the supergiant is about 2 million times larger than that of the neutron star.

Data collected by ESA's XMM-Newton X-ray observatory appear to show that a denser patch in the stellar wind, released by the supergiant and accreted by the neutron star, contributed to boosting the X-ray luminosity of the source.

The illustrations show the binary system, first in its ordinary state (frame 1; the numbering of frames proceeds from left to right and from top to bottom), with the neutron star accreting matter from the supergiant’s wind, and then as the accretion rate is abruptly enhanced through the ingestion, by the neutron star, of a clump of matter present in the stellar wind. The clump of matter is shown as it gradually approaches the neutron star (frames 2 and 3) and subsequently engulfs the neutron star, which accretes its material (frames 4, 5 and 6); eventually the remains of the clump move away or are dissolved in the diffuse matter of the stellar wind (frame 7) and the system returns to its normal state (frame 8).

The ingestion of the clump material produced a dramatic increase in the X-rays released by the neutron star, which was detected with XMM-Newton. The peak in the X-ray luminosity corresponds to frame 5, or when the accretion rate was at its maximum.