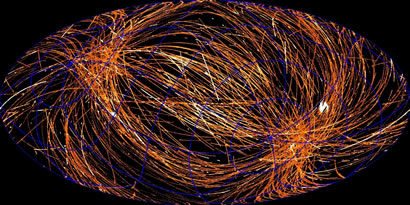 XMM-Newton, with the large collecting area of its mirrors and the high quantum efficiency and low background of its EPIC detectors, is the most sensitive X-ray observatory flown to date. This is clearly apparent during EPIC-pn slew exposures which yield on average only seven seconds of on-source exposure time.

The data collected by XMM-Newton's EPIC-pn camera during this 'downtime', as the spacecraft slews between dedicated pointings, already covers half of the sky, and forms the input for the XMM-Newton Slew Survey Catalogue.

This exposure-corrected 0.2-2 keV all-sky image is made up of EPIC-pn slew observations from 836 slews, spanning nearly nine years of operations. It is a mosaic of 53 495 1-degree images (plus equivalent exposure maps). The image is in Galactic projection, centred on the Galactic Centre, and the blue lines show the equatorial coordinate grid.