The X-ray pulsar SXP 1062 embedded in a supernova remnant

The X-ray pulsar SXP 1062 embedded in a supernova remnant 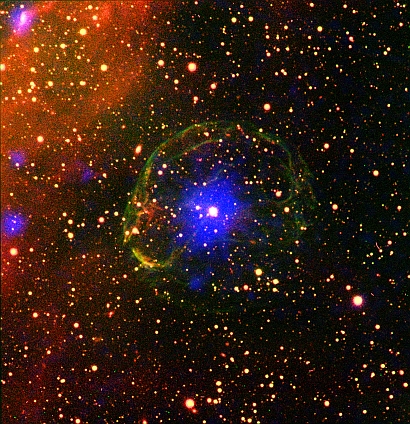 This image is a composite view of the newly discovered X-ray pulsar SXP 1062 still embedded in the remnant of the supernova that created it. SXP 1062 accretes mass from its stellar companion, a massive, hot, blue 'Be' star, the two objects forming a Be/X-ray binary.

The X-ray emission from this object has been detected using data from ESA's XMM-Newton as well as NASA's Chandra space-based observatories. A later study of optical images of the source and its surroundings revealed the bubble-shaped signature of the supernova remnant around the binary system. Since supernova remnants shine only for a few tens of thousands of years before dispersing into the interstellar medium, not many pulsars have been detected while still enclosed in their expanding shell. This is the first clear example of such a pair in the SMC.

The bubble-shaped feature is the supernova remnant that encloses the pulsar. The diffuse glow at the centre represents X-ray emission from both the pulsar and the hot gas that fills the remnant of the supernova. Other point-like X-ray sources are background, extragalactic objects.

Characterised by a surprisingly slow rotation period of 1062 seconds, this pulsar is located in the Wing of the Small Magellanic Cloud (SMC), a peripheral region of this satellite galaxy of the Milky Way. The Wing is part of the tidal feature that connects the SMC to its neighbour, the Large Magellanic Cloud.