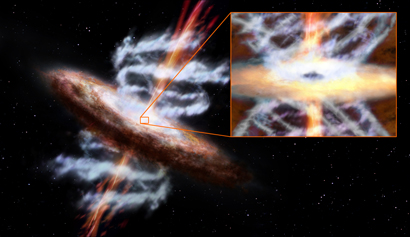 The image shows an artist's impression of a galaxy that is releasing material via two strongly collimated jets (shown in red/orange) as well as via wide-angle outflows (shown in gray/blue). Both jets and outflows are being driven by the black hole located at the galaxy's centre.

The insert on the upper right shows an enlarged view of the active galactic nucleus (AGN) at the centre of the galaxy, where a supermassive black hole is vigorously accreting matter from its surroundings via an accretion disc. However, the process of accretion onto the black hole is not fully efficient; it thus results in the ejection of matter via jets and outflows with wider opening angles, which arise from ionised material in the accretion disc.

The wide-angle outflows are also referred to as ultra-fast outflows, or UFOs, because their velocities are very large – between 10 000 and 100 000 kilometres per second. These UFOs have been discovered by observing blue-shifts in the absorption lines of highly ionised iron atoms in the X-ray spectra of AGN-hosting galaxies. The first systematic study of UFOs, conducted with ESA's XMM-Newton X-ray Observatory on a sample of 42 galaxies, has demonstrated that these outflows are quite common, as they are present in about 40 per cent of the sources in the sample. These results have been reported in a series of papers by Tombesi et al. (2010; 2011; 2012).

These outflows appear to be massive and powerful enough to be major agents in the feedback processes that regulate the growth of galaxies and of the black holes that reside at their cores. Furthermore, UFOs are more massive, slower and have wider opening angles than the relativistic and strongly collimated jets, and are thus bound to interact more significantly with the interstellar medium of the host galaxy. These feedback mechanisms may be able to quench star formation in the bulge and the growth of the black hole at the same time, thus contributing to establishing the well-known empirical correlations observed between the mass of a black hole and some properties of the host galaxy's bulge, such as its stellar content and the average velocities of stars in the bulge.

Measuring the power of black-hole driven outflows in galaxies