XMM-Newton image of Centaurus A

XMM-Newton image of Centaurus A 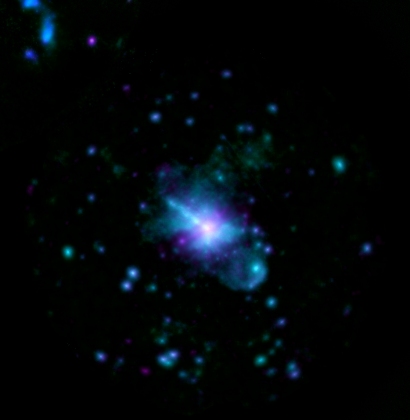 Centaurus A is the closest giant elliptical galaxy containing a radio-loud Active Galactic Nucleus (AGN).The X-ray image reveals emission coming from the active nucleus, at the centre of the image, and from the jets and lobes made up of highly energetic particles emanating from it. A number of foreground point-like sources are also visible, scattered across the image: these are X-ray binaries belonging to our Galaxy, the Milky Way. The X-ray emission from the core of Centaurus A is mainly produced by the material accreted by the central black hole. In addition, the inner part of the two jets that stem from the accretion disc also contribute to the central X-ray source, although they are not resolved in this image.

Further away from the centre of the image, two X-ray bright structures are visible: a filament extending to the upper left side of the galaxy's core and a faint lobe bounded by an arc-shaped region to its lower right. Both structures are believed to consist of gas from the galaxy's interstellar medium that has been heated to very high temperatures while interacting with the jet. As the outflowing material in the jets and lobes expands supersonically, it gives rise to shocks that contribute to heating up the surrounding gas and cause it to emit X-rays.