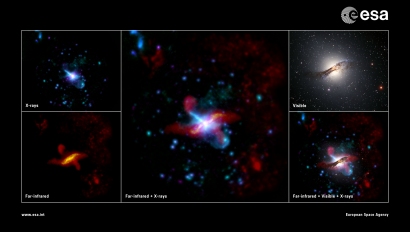 The iconic Centaurus A galaxy, also known as NGC 5128, is the closest giant elliptical galaxy containing a radio-loud Active Galactic Nucleus (AGN). At a distance of only about 12 million light years, Centaurus A is an ideal test bed for investigating the physical processes taking place in active galaxies, allowing astronomers to spatially resolve details that are much harder to detect in more distant sources.

When viewed at optical wavelengths (upper right panel), Centaurus A exhibits the morphology of an elliptical galaxy with a spheroidal halo of stars; in addition, a prominent dark lane appears to cross the halo at these wavelengths. Observations in the infrared portion of the electromagnetic spectrum allow astronomers to peer through this obscuring lane and to reveal its structure by detecting the glow of cold dust within it (lower left panel). Moreover, due to the AGN activity of Centaurus A, powerful jets of highly energetic particles stream from the core of the galaxy, where a supermassive black hole accretes matter at a tremendous rate. As electrons in the jets emit synchrotron radiation, the jets shine brightly in X-rays (upper left panel) as well as at sub-millimetre (lower left panel) and radio wavelengths.

Multi-wavelength observations of Centaurus A allow astronomers to develop a comprehensive view of how the various components of this fascinating galaxy interact with one another on different scales. The composite images combining view of this galaxy at different wavelengths (central and lower right panels) highlight the complex interaction between the powerful jets stemming from the core of Centaurus A and the diffuse medium that surrounds it.