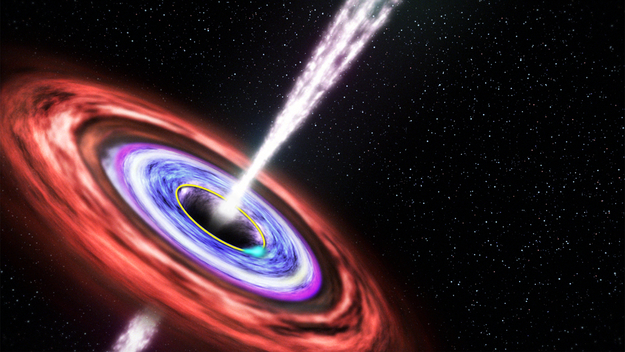 This illustration shows an artist's impression of Sw J1644+57, a supermassive black hole hosted at the centre of a distant galaxy. The black hole, previously dormant, was temporarily switched on as a star passed too close to it. Torn apart by the black hole's gravitational pull, the star was tidally disrupted and its debris started orbiting around the black hole forming a disc. Part of the debris was rapidly accreted by the black hole, causing a sudden boost in the luminosity of the host galaxy's centre, especially at the highest energies.

Originally detected as a gamma-ray burst (GRB) by the NASA satellite Swift, the source, named Sw J1644+57, remained exceptionally bright for a few weeks after its discovery, unlike any other known GRB. After further observations, astronomers were able to link the flaring source to a star that was being disrupted and subsequently devoured by the supermassive black hole at the centre of a distant galaxy.

Further observations performed with the ESA XMM-Newton and the Japan/US Suzaku X-ray observatories revealed that Sw J1644+57 exhibits what astronomers call quasi-periodic oscillations: luminosity fluctuations that occur in a regular fashion but are only seen for a certain period of time before disappearing. Quasi-periodic oscillations are known to arise in a very special site around a black hole: the so-called innermost stable circular orbit, which depends on the black hole's mass and spin and defines its range of action. At distances larger than this limiting orbit (indicated with a yellow circle in the illustration), matter can revolve around the black hole on stable trajectories, but anything located within this orbit will inexorably precipitate towards the black hole and be quickly accreted onto it.

The quasi-periodic oscillations detected in Sw J1644+57 indicate that the flare was produced by matter on the edge of an accretion disc around the black hole. This was the last signal that we received from the debris of the disrupted star before being engulfed and disappearing beyond the black hole's event horizon. The source of the quasi-periodic oscillations is indicated with a light-blue glow along the innermost stable circular orbit.

Final cry of disrupted star points to site of oblivion