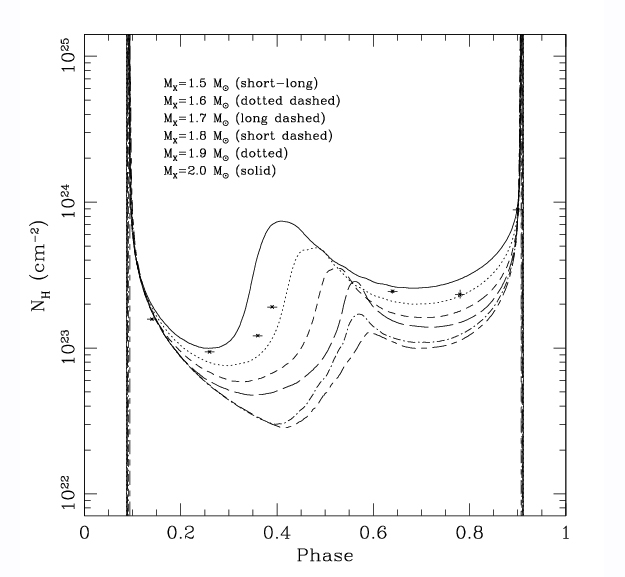 This graph shows the variations of absorption in the soft X-ray emission from an eclipsing, highly obscured high-mass X-ray binary as a function of the system's orbital phase.

Highly obscured high-mass X-ray binaries consist of a neutron star that is accreting mass from the stellar wind released by its companion, a blue supergiant star. The neutron star is deeply embedded in the stellar wind, which absorbs part of the radiation from the accretion process – in particular, at soft X-ray energies. As the two components of the system move around one another and the tail of material trails the neutron star, different amounts of absorbing material may occur along the line of sight to a distant observer. As a result, soft X-ray emission from the system is observed with distinctive variation in its absorption, depending on the orbital phase of the system.

The different curves show theoretical predictions of the absorption variations for systems that harbour neutron stars with different masses – ranging from 1.5 solar masses (lower curve) to 2 solar masses (upper curve). The predictions are based on numerical simulations.

The data points are based on observations of the eclipsing, highly obscured high-mass X-ray binary IGR J17252-3616 obtained with ESA's XMM-Newton X-ray space observatory. The value of the neutron star mass that best matches the data is of 1.9 solar masses.

The comparison between theoretical predictions and observations represents a new method to estimate the mass of neutron stars hosted in these type of binary system.