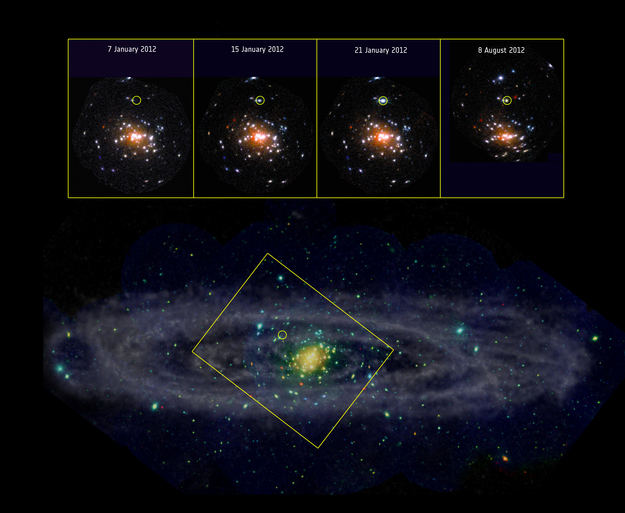 The sequence of images at the top depict the centre of Andromeda and were taken with XMM-Newton on four occasions during 2012. These images illustrate the discovery of a new source, XMMU J004243.6+412519 (highlighted with a circle).

XMMU J004243.6+412519 was first detected on 15 January 2012 within an XMM-Newton survey of Andromeda, designed to study the X-ray source population of this galaxy with particular emphasis on novae. On 21 January 2012, XMM-Newton recorded a significant brightening of this source; with a luminosity in excess of 1039 erg/s, it was classified as an ultra-luminous X-ray source, or ULX. This is only the second ULX known in the Andromeda galaxy. The source then became fainter, as shown in the last image of the sequence, taken on 8 August 2012.

XMMU J004243.6+412519 is an X-ray binary system  consisting of a stellar-mass black hole that is accreting matter from a low-mass companion star. The source's dramatic boost in X-rays indicates a transition to an accretion rate close to the black hole's Eddington limit, or even above it.