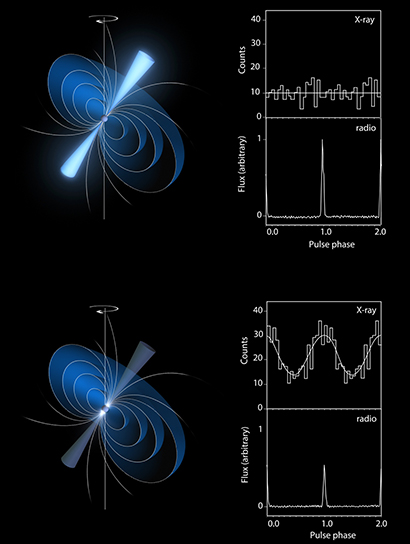 This illustration shows the two states of emission observed from pulsar PSR B0943+10, which is well known for switching between a 'bright' and 'quiet' mode at radio wavelengths. Observations of PSR B0943+10, performed simultaneously with ESA's XMM-Newton X-ray observatory and ground-based radio telescopes, revealed that this source exhibits variations in its X-ray emission that mimic in reverse the changes seen in radio waves. No current model is able to predict what could cause such sudden and drastic changes to the pulsar's entire magnetosphere and result in such a curious emission.

In the upper part of the illustration, the artist's impression on the left shows the pulsar with glowing cones of radiation stemming from its magnetic poles – a state referred to as 'radio-bright' mode. Radio emission from pulsars is known to arise from these cones, and we see it pulsate because the pulsar's rotation and magnetic axes are misaligned. The graphs on the right side show data from X-ray observations, performed with XMM-Newton (upper graph), and from radio observations, performed with the Low Frequency Array (LOFAR; lower graph). The upper graph shows that, in the 'radio-bright' mode, the pulsar does not shine brightly in X-rays. The lower graph shows a bright and pulsating emission at radio wavelengths.

In the lower part of the illustration, the artist's impression on the left shows the pulsar in a different state, with glowing 'hot-spots' that are located at its magnetic poles. In particular, the illustration shows the pulsar in a state characterised by bright X-ray emission, arising from the polar caps, and relatively low radio emission from the cones that stem from the pulsar's magnetic poles ('X-ray-bright/radio-quiet' mode). The graphs on the right side show how, in this mode, the pulsar exhibits a brighter and pulsating X-ray emission, whereas the radio emission is fainter but still pulsating.