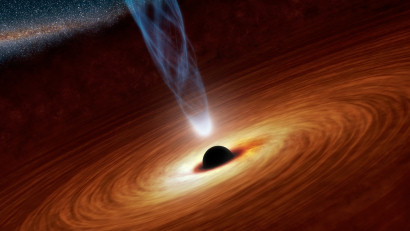 ESA's XMM-Newton and NASA's NuSTAR have detected a supermassive black hole spinning at almost the speed of light in the heart of spiral galaxy NGC 1365. The rate at which a black hole spins encodes the history of its formation. An extremely rapid rotation could result from either a steady and uniform flow of matter spiralling in via an accretion disc (as shown in this artist impression) or as a result of the merger of two galaxies and their smaller black holes.

Also depicted in this image is an outflowing jet of energetic particles, believed to be powered by the black hole's spin. The regions near black holes contain compact sources of high energy X-ray radiation thought, in some scenarios, to originate from the base of these jets. The nature of the X-ray emission enables astronomers to see how fast matter is swirling in the inner region of the disc, and ultimately to measure the black hole's spin rate.