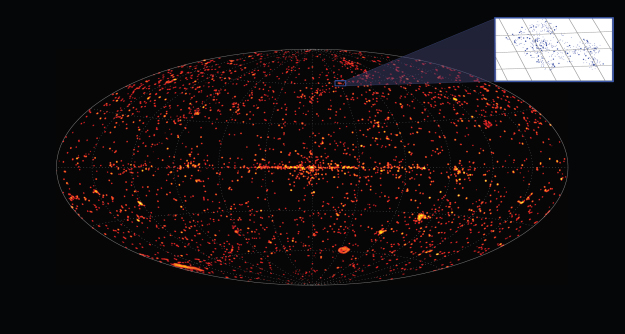 This image shows the density of observed objects in the third XMM-Newton Serendipitous Source Catalogue (3XMM-DR4), mapped in Galactic coordinates.

Sources in the 3XMM catalogue are identified and isolated from serendipitous data recorded by XMM-Newton's EPIC X-ray cameras. In each of the 600-700 observations made each year, around 70 extra sources are captured in addition to the target object which usually only takes up a small fraction of the field of view. Covering observations between February 2000 and December 2012, the 3XMM catalogue contains some 531 261 X-ray source detections relating to 372 728 unique X-ray sources.

The inset shows an expanded view of the small region indicated where the individual sources can be seen.