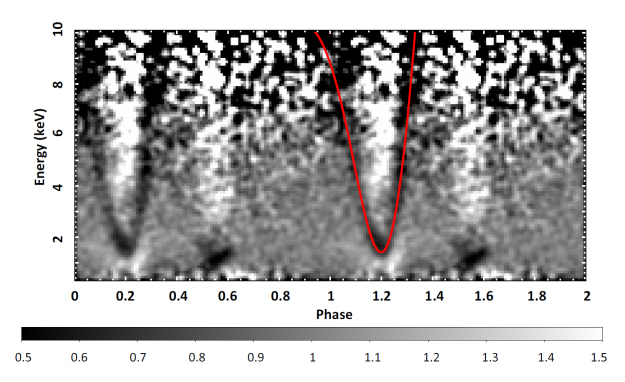 This graph is an energy-resolved folded light curve. It shows how the X-ray emission from magnetar SGR 0418+5729 varies as a function of energy and, at the same time, of the star's rotation period. The intensity of the emission is shown in a grey scale, with black corresponding to lower intensity and white to higher intensity. The phase represents the part of the periodic cycle where measurements are made and is plotted on the horizontal axis. Energy is plotted on the vertical axis. The data were collected with ESA's XMM-Newton X-ray Observatory in the energy range between 0.2 and 10 keV on 12 August 2009.

At regular intervals during its 9-second rotation, the magnetar's emission declines at energies between 1 and 5 keV. This can be seen in the graph as a dark V-shaped area around the orbital phase of 0.2; the same V-shaped feature is showed again around 1.2, with a theoretical prediction plotted in red.

Since the decrease in emission took place only at a certain rotational phase, this indicates that some of the X-rays released by the magnetar were being absorbed by particles that were located in a well-confined region of the magnetar. The absorption phenomenon, called cyclotron absorption, is caused by protons that interact with the X-rays emitted by the magnetar.