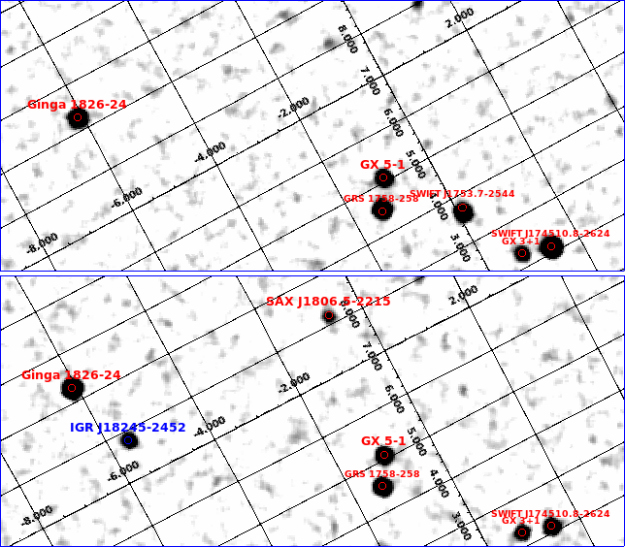 In the later image, the source IGR J18245-2452 is visible (highlighted with a blue label), whereas it is not in the earlier image. Astronomers detected IGR J18245-2452 during a transient outburst of X-rays and identified it as a millisecond pulsar in a binary system. The X-ray outburst activity is caused by the pulsar as it accretes mass from its companion star. This millisecond pulsar is located in the globular cluster M28, which is part of the Galactic Bulge, at a distance of about 18 000 light-years from Earth.

Using data from other telescopes, including ESA's XMM-Newton X-ray Observatory and several radio telescopes, astronomers revealed that IGR J18245-2452 is in a crucial transitional phase. Millisecond pulsars spin much faster than expected for their old age, and astronomers believe their rotation receives a boost as they accrete matter in a binary system. The newly found pulsar swings back and forth between accretion-powered X-ray emission and rotation-driven radio emission, bringing conclusive evidence for this 'recycling' scenario.

The other sources visible in these two images are binary neutron stars and other X-ray sources. Some are present in both images, while others are present only in either of the two, highlighting the intense variability of the sky – and particularly of the Galactic Bulge – when viewed in X-rays.