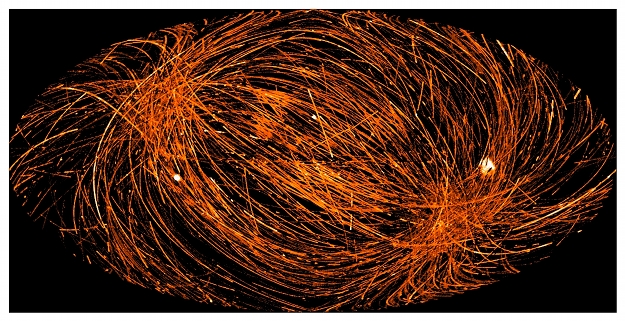 Bright strips of X-ray data record the slew history of ESA's XMM-Newton as it moves its focus between different objects in the sky. The image contains information of over 1200 individual slews made between 2001 and 2012, and covers about 62 per cent of the sky. It is a mosaic of individual images of 1 x 0.5 degrees and is shown in Galactic projection, with the Galactic plane lying across the centre of the image. The data cover an energy range of 0.2–2 keV.

A number of well-known X-ray sources are seen in the image, including the Vela supernova remnant (the bright white feature at the far right), the Cygnus Loop (far left), Scorpius X-1 (just above the image centre), and the Small and Large Magellanic Clouds (in the south ecliptic pole, within the concentrated region of overlapping slews at the bottom right of the image).