Galaxies in the Bullet Group - annotated

Galaxies in the Bullet Group - annotated 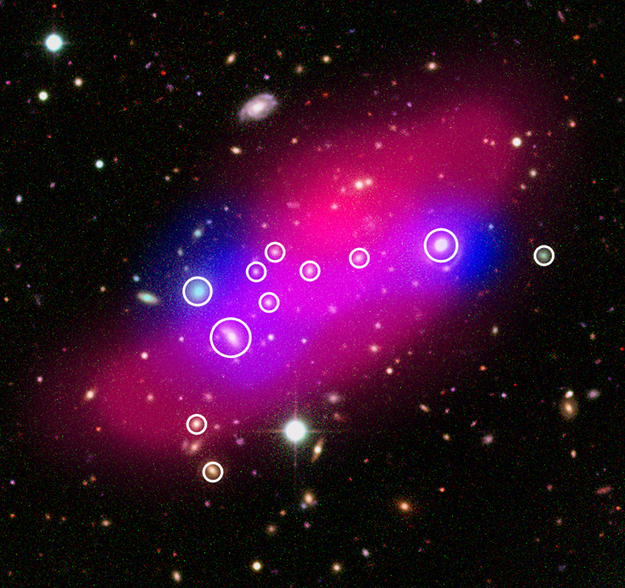 The galaxies belonging to the group, embedded in the diffuse dark matter (shown in blue), are highlighted with small circles. Hot gas, which fills the space between galaxies and comprises the bulk of ordinary (baryonic) matter in the group, is shown in pink, as imaged by ESA's XMM-Newton X-ray observatory.

The light from galaxies and hot gas belonging to the group, which lies at a redshift of z=0.351, has been travelling for almost four billion years before reaching us. Other galaxies, either in the foreground or background of the Bullet Group, are sprinkled across the image, as well as bright foreground stars that belong to our Galaxy.

The group's components appear to be clearly separated, with the hot gas partitioned from the rest of the mass within the group. This is the smallest object ever found to show such an effect, which was caused by a merger in the group's past.

Astronomers were able to map the extent of the Bullet Group's dark matter through its gravitational lensing of background galaxies. This effect is particularly evident in the centre-right part of this image, where a round, bright galaxy that belongs to the Bullet Group is circled by curious arcs of light – the distorted image of another galaxy lying much farther away.

By exploring the contents of these cosmic wrecks, astronomers can learn more about the properties of dark matter. In particular, from the split between the dark matter and the hot gas, they can constrain how much dark matter does – or does not – interact with normal matter.

This image is a composite of an X-ray image (shown in pink) from ESA's XMM-Newton observatory, a three-colour (red, green, blue) optical image from the Canada-France-Hawaii Telescope (CFHT), and a dark matter overlay (indicated in blue) based on data from CFHT, the NASA/ESA Hubble Space Telescope, and the W. M. Keck Observatory.

Cosmic collision in the Bullet Group