Artist's impression of black-hole wind in a galaxy

Artist's impression of black-hole wind in a galaxy 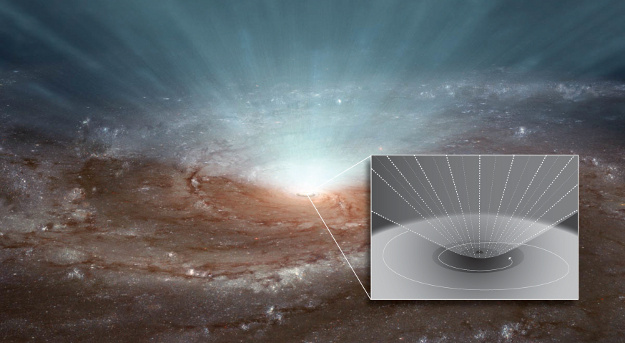 This illustration shows the powerful wind driven by the supermassive black hole at the centre of a galaxy. The schematic figure in the insert depicts the innermost regions of the galaxy where a black hole accretes the surrounding matter (light grey) at a very high pace via a disc (darker grey). At the same time, part of that matter is cast away through powerful winds.

A study based on joint observations with ESA's XMM-Newton and NASA's NuSTAR X-ray telescopes of the quasar PDS 456, which hosts a very active black hole, has shown that the winds driven by a black hole can be wide and almost spherical. This discovery supports the picture of black holes having a significant impact on star formation of their host galaxy.

The artwork of the galaxy is based on an image of the Pinwheel galaxy (Messier 101) taken by the NASA/ESA Hubble Space Telescope.