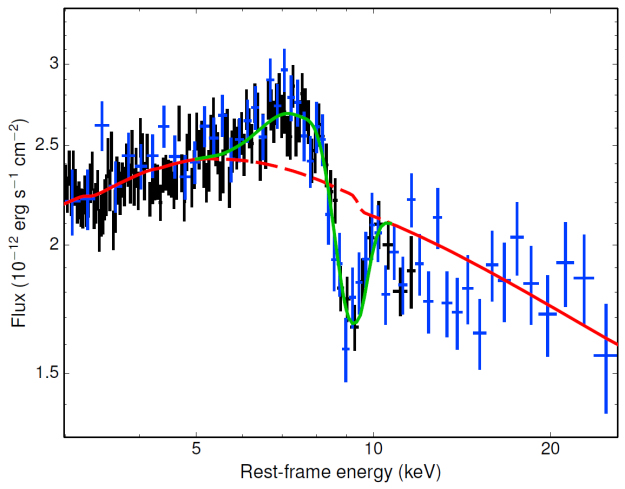 This image shows the X-ray spectrum of PDS 456, a galaxy lying just over two billion light-years away, hosting an exceptionally active black hole with the mass of one billion Suns. PDS 456 is a quasar, a class of galaxies that appear as point sources because the brightness produced by their stars is outshone by emission from the activity of the central black hole.

The spectrum is based on observations performed with ESA's XMM-Newton X-ray telescope (shown in black) and NASA's Nuclear Spectroscopic Telescope Array (NuSTAR) mission (shown in blue) in 2013.

A peculiar feature in the spectrum, the peak and trough below 10 keV, revealed the geometry of the wind gusting from the black hole.

The trough in the spectrum is a well known absorption feature present in many quasars and caused by highly ionised iron – nuclei of iron that have been stripped of all but one or two of their electrons. This absorption line is blue-shifted with respect to what is observed in the laboratory, indicating that it is caused by iron ions that are moving towards the observer in an outflow or wind.

The peak that precedes it, however, was never before seen in the spectrum of a quasar: it is caused by the direct emission from iron ions. This indicates that the emitting ions lie outside the observer's line of sight, and that the material is flowing away from the black hole not only towards the observer but in every direction.

Such a pair of emission and absorption lines is called a P-Cygni profile, as it was first observed in the variable star P Cygni. It is characteristic of a gaseous envelope expanding away from the central source.

The red line shows the baseline of the continuum quasar light, or what the quasar would look like without any winds.

With the newly detected feature in the spectra of PDS 456, the astronomers could finally determine the geometry of the black hole wind, revealing a wide, almost spherical outflow of matter. This discovery supports the scenario of black holes having a significant impact on the star formation of their host galaxy.