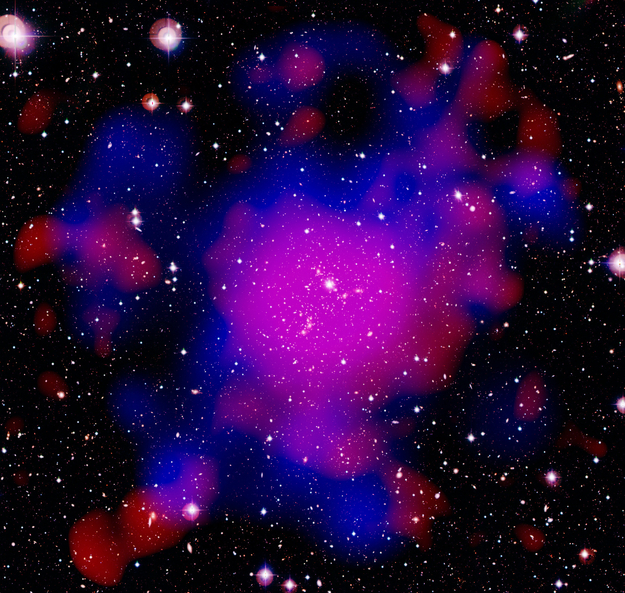 Galaxy clusters are the most massive cosmic structures held together by gravity, consisting of galaxies, hot gas and dark matter. They sit in the densest hubs of the filamentary 'cosmic web' that pervades the Universe.

Using ESA's XMM-Newton X-ray observatory, astronomers have detected three massive filaments flowing towards the core of Abell 2744 and connecting it with the cosmic web. The filaments also consist of galaxies, hot gas and dark matter. One of them can be seen as the elongated structure on the left side of the image, another one is visible towards the upper right, and the third one below the cluster, slightly towards the right. (These are indicated with ellipses in this image.)

There are also two structures – one on the lower left of the cluster, the other in the upper central part of the image – which are not physically linked to the cluster but are the projection of more distant structures viewed along the same line of sight.

Abell 2744 has a mass of almost two million billion times the mass of our Sun. Light from the cluster galaxies and gas travelled for over 3 billion years to reach Earth.

The image measures about half a degree across. The image is sprinkled with foreground stars belonging to our Galaxy, the Milky Way, which are visible as the roundish objects with diffraction spikes.