ESA Science & Technology - Supernovae and quasars in the expanding Universe

Supernovae and quasars in the expanding Universe

Supernovae and quasars in the expanding Universe 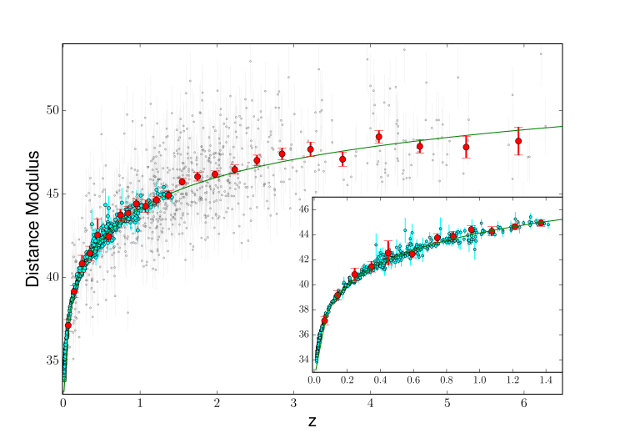 This graph shows how measurements of distant astronomical objects can be used to study the expansion history of the Universe.

Light travelling across the cosmos has its wavelength stretched due to the overall cosmic expansion, which increases the distance between any two points in the Universe. This stretching effect is known as redshift.

In this graph, the distance (represented by the distance modulus) to over a thousand astronomical sources is plotted as a function of their redshift (z). This relation can be used to study how the expansion of the Universe changed over cosmic history.

The blue points represent supernovae of type Ia, exploding white dwarf stars in a binary system. These are used as 'standard candles', astronomical sources for which it is possible to estimate the actual luminosity and, from it, the distance.

The grey points refer to quasars, the cores of galaxies that host an actively accreting supermassive black hole. As suggested in a study by Guido Risaliti and Elisabeta Lusso, quasars can also be used as standard candles on the basis of a relation between their emission at ultraviolet and X-ray wavelengths.

The red points show the average values of several quasars with similar redshift. Quasars are a less precise tools to measure distance than type Ia supernovae, but they are available in larger numbers especially at higher redshifts, yielding complementary information about the earlier history of the expanding Universe that is inaccessible to supernova observations.

A new technique to gauge the distant Universe