Distribution of galaxy clusters in the XXL survey

Distribution of galaxy clusters in the XXL survey 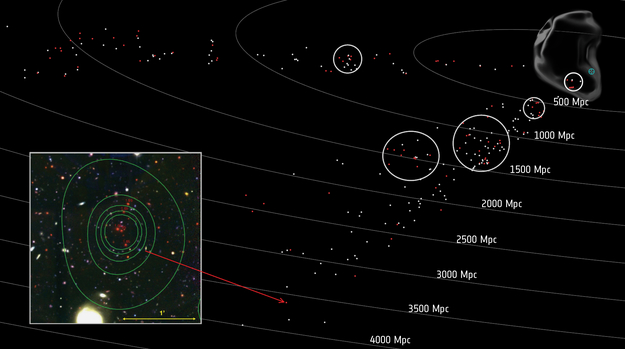 The XXL survey covered two huge regions each of which, if viewed on the sky, would have a two-dimensional area a hundred times larger than the full Moon. These extensive swathes of sky were mapped back to a time when the Universe was half of its present age with a total of 450 galaxy clusters detected, and their properties and distributions mapped, in the process.

The red and white dots along the top of the figure are the galaxy clusters that were detected in the XXL South Field (XXL-S); those running diagonally from the Milky Way are in the XXL North Field (XXL-N). Each dot is a cluster of galaxies and contains up to a few thousand galaxies. The red dots represent the 100 brightest clusters in the sample. Of these, the most distant is XLSSC029, at a distance of 3.42 gigaparsecs.

In this illustration, the location of our Galaxy, the Milky Way, is indicated by the blue symbol. The Milky Way is part of the Laniakea supercluster (shown by the transparent shape).

Among the many discoveries made with the XXL survey are five superclusters – clusters of galaxy clusters – which are circled on this figure.

This illustration is taken from an animation made by Daniel Pomarede (CEA, Saclay) for the XXL consortium.