ESA Science & Technology - The peculiar wind of a spiral galaxy

The peculiar wind of a spiral galaxy

The peculiar wind of a spiral galaxy 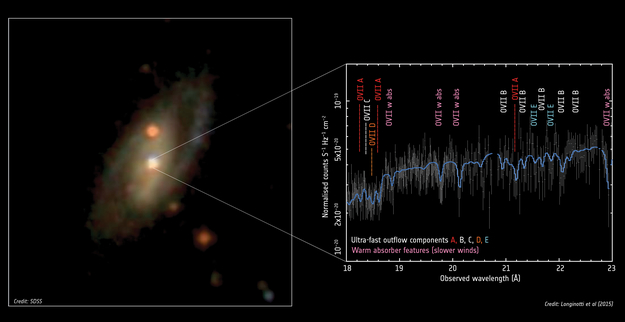 XMM-Newton's analysis of the ultra-fast outflows emanating from around a supermassive black hole at the centre of the Seyfert spiral galaxy identified as IRAS17020+4544. The galaxy is located about 800 million light-years from Earth.

The image of the galaxy (shown left) was taken with the Sloan Digital Sky Survey. The active nucleus of the galaxy is the yellow–white spot at the centre; the red points are foreground stars.

The supermassive black hole at the heart of this galaxy has a mass of nearly six million Suns. XMM-Newton found that ultra-fast outflows from around the black hole are moving at 23 000–33 000 km/s, about 10% the speed of light, sufficiently energetic to heat the gas in the galaxy and suppress star formation – the first time it has been seen in a relatively normal spiral galaxy.

X-ray emission from the fast winds from galactic cores are usually dominated by iron atoms with many of their electrons stripped off, but this galaxy's winds turn out to be rather unusual, exhibiting lighter elements like oxygen, with no iron detected – as seen in the spectrum (right).

The spectrum shows several different components (A–E) of the ultra-fast outflow. 'Warm absorber features' mark the parts of the outflow that are travelling more slowly (hundreds to thousands km/s).