Light curve of the Rapid Burster

Light curve of the Rapid Burster 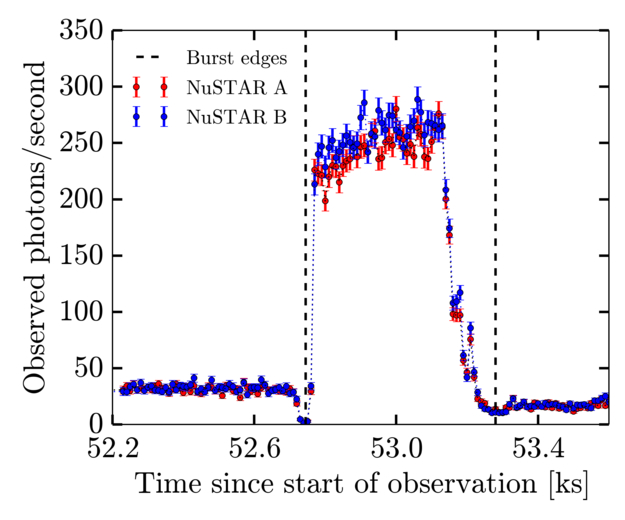 Variations of brightness observed in the binary system MXB 1730-335, also known as the 'Rapid Burster', by NASA's NuSTAR X-ray telescope.

This binary system comprises a low-mass star in its prime and a neutron star, which strips its stellar companion of some of its gas; the gas forms an accretion disc and spirals towards the neutron star.

The Rapid Burster is the only source known to exhibit two types of X-ray flashes: the common 'type-I' bursts, which happen during periods of bright emission and are understood in terms of nuclear reactions ignited on the neutron star's surface, and the much more elusive 'type-II' burst, which liberate enormous amounts of energy during periods otherwise characterised by very little emission occurring.

The NuSTAR light curve shows the increase of brightness during a type-II burst that was observed in October 2015. This was part of an observing campaign using three X-ray space telescopes – NASA's NuSTAR and Swift, and ESA's XMM-Newton – to find out more about this system.

These observations have revealed that, before such a burst, the fast spinning magnetic field of the neutron star keeps the gas flowing from the companion star at bay, preventing it from reaching closer to the neutron star and effectively creating an inner edge at the centre of the disc. However, as the gas continues to flow and accumulate near this edge, it spins faster and faster, and eventually catches up with the spinning velocity of the magnetic field.