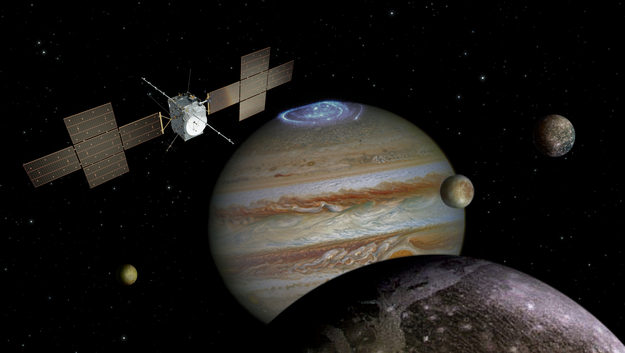 This artist's impression shows ESA's forthcoming Jupiter Icy Moons Explorer (JUICE) mission, which is planned for launch in 2022 and arrival at Jupiter by 2029.

An illustration of the spacecraft design can be seen to the upper left of the frame, with the colourful banded disc of the gas giant Jupiter - complete with vivid polar aurora - visible in the background.

JUICE will spend at least three years exploring Jupiter and three of the Galilean moons: Ganymede, Europa, and Callisto.

Ganymede is shown in this composite image to the bottom right, partially visible in the foreground, Callisto to the far right, and Europa centre-right. The small moon on the left is a moon named Io - while not a target of the JUICE mission, this moon is an interesting and volcanically active part of the Jovian system.

This view is not to scale.

The image of Jupiter is courtesy of the NASA/ESA Hubble Space Telescope (an optical image of Jupiter's disc, and ultraviolet observations of the aurora), and the moons were imaged by NASA's Galileo spacecraft.