The most powerful black hole eruption in the Universe

The most powerful black hole eruption in the Universe 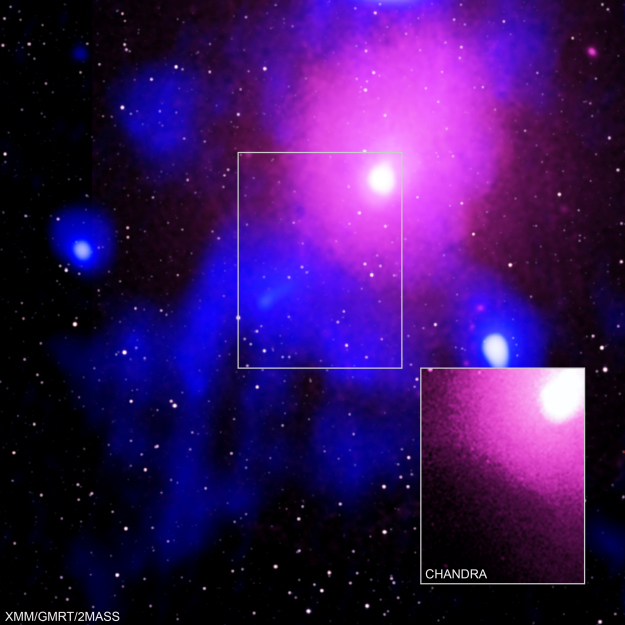 Astronomers using ESA's XMM-Newton and NASA's Chandra X-ray space observatories, along with radio telescopes on ground, have spotted the aftermath of the most powerful explosion ever seen in the Universe – after the Big Bang.

The huge outburst occurred in the Ophiuchus galaxy cluster, a large cosmic conglomerate with thousands of galaxies, hot gas and dark matter held together by gravity, lying some 390 million light years away. In particular, the eruption is linked to powerful jets released by the supermassive black hole that sits at the core of the cluster's central galaxy and actively feeds on the surrounding gas, occasionally blasting off large amounts of matter and energy.

In this image, the diffuse hot gas pervading the cluster is revealed through X-ray observations from XMM-Newton (shown in pink), radio data from the Giant Metrewave Radio Telescope (shown in blue), and infrared data from the 2MASS survey (shown in white). The inset in the lower right shows a zoomed-in X-ray view based on Chandra data (also shown in pink), while bright dots sprinkled across the image reflect the distribution of foreground stars and galaxies.

The X-ray emission reveals the edge of a large cavity, carved in the hot gas by the black hole jets. The cavity is filled with radio emission from electrons accelerated to almost the speed of light – likely a result of the black hole's feeding activity – providing evidence that an eruption of unprecedented size took place there.