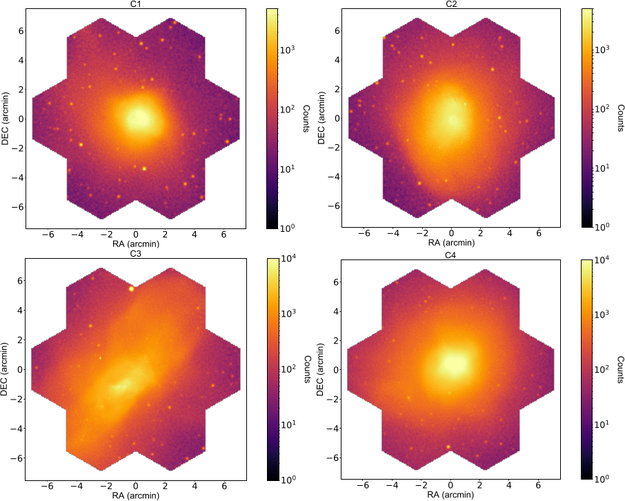 This image shows a simulated X-ray view of four different galaxy clusters, all lying just over one billion light years from us. These images are simulations of what the X-ray Integral Field Unit (X-IFU) – one of the two instruments carried by ESA's future Athena X-ray observatory – will see after its launch in the early 2030s.

Galaxy clusters comprise hundreds to thousands of galaxies, interspersed by hot, diffuse gas at temperatures of millions of degrees or more, which shines brightly in X-rays.

These images map the photon count per pixel: lighter yellow hues represent the areas where most photons are gathered, and darker purples and blacks represent the least.

In each pixel, spanning about 5 arcseconds in terms of effective diameter, Athena will be able to create X-ray spectra with an unprecedentedly accurate energy resolution (2.5 eV or better). The satellite's optics system has a significantly larger area than any other operational or planned X-ray observatory, allowing it to gather a larger number of photons per pixel than previously possible. This will enable Athena to probe early epochs in the history of Universe, reaching out to greater distances than those covered by current X-ray observatories such as ESA's XMM-Newton and NASA's Chandra. Groups and clusters of galaxies trace the large-scale pattern of filaments, the cosmic web, that pervades the Universe, and Athena will be able to extend our studies of these structures back to the epoch when they were taking shape (equivalent to redshift z~2).

Each of these four mosaics comprises seven different simulated X-IFU pointings, each lasting 100 000 seconds (equivalent to over 27 hours). They were modelled using the SIXTE (SImulation of X-ray TElescopes) software package.