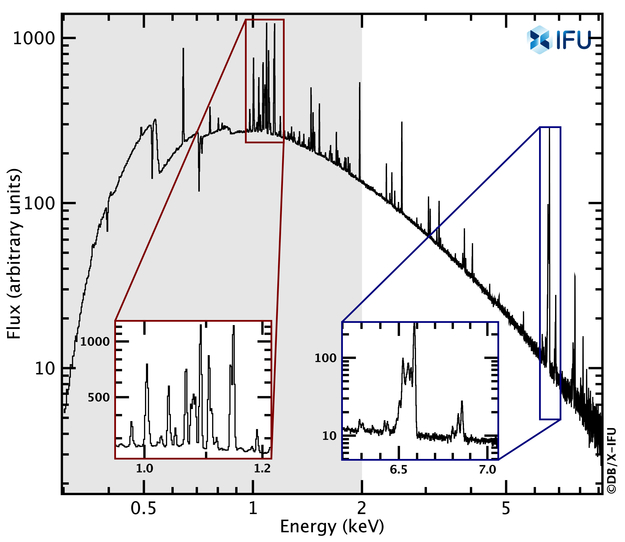 This figure shows a simulated spectrum demonstrating the detail that will be captured by the X-ray Integral Field Unit (X-IFU) aboard ESA's Athena X-ray observatory, which will be launched in the early 2030s.

To study various characteristics of stars and other astronomical sources, the light they emit is dispersed across different wavelengths to create a spectrum, as shown here. This image simulates the spectrum that would be obtained from X-IFU observations of the Perseus cluster, a massive gathering of thousands of galaxies pervaded by hot, X-ray emitting gas. Located in the Perseus constellation, it is the brightest X-ray galaxy cluster in the sky.

The graph shows the amount (y-axis) and energy (x-axis) of light that will be collected by Athena's X-IFU instrument, and is fitted to a spectrum produced by JAXA's Hitomi satellite as it performed its first and only observation in 2016, targeting the Perseus cluster. Hitomi used its Soft X-ray Spectrometer to observe a 3 × 3 arcminute region of the cluster for 230 000 seconds to produce a spectrum in the energy region displayed here to the right of the image; the Hitomi spectrum was used to derive this Athena simulation, with X-IFU modelled as observing a smaller area of 30 by 30 arcseconds for 100 000 seconds.

The lines in the left half of the figure (shaded area), were not observed by Hitomi's SXS instrument. This energy range will be explored by the Resolve instrument on JAXA's upcoming X-ray Imaging and Spectroscopy Mission (XRISM), which is scheduled for launch in the early 2020s.

The two smaller inset boxes zoom in on two specific emission lines – L and K – of the iron ions present in the X-ray emitting gas, showing a simulation of how X-IFU will view these lines. X-IFU will not only collect an energy flux almost 100 times greater than Hitomi in the same energy domain and over shorter exposure times, but also explore a huge range of lower energies, revealing much about X-ray spectra that current observatories cannot.

Acknowledgement: C. Pinto, A. Fabian and the Hitomi Collaboration