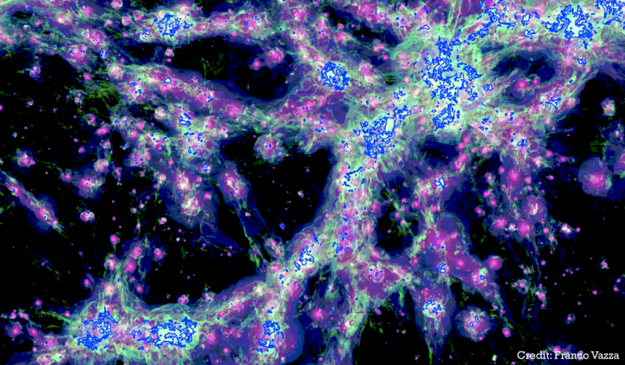 On the very largest of spatial scales, the Universe is organised by gravity into a pattern akin to a spider's web formed of normal and dark matter: the cosmic web. While the objects that exist along its filaments – individual galaxies, along with galaxy groups and clusters – have been observed for some time in optical and infrared wavelengths, a large portion of this web has not yet been detected and explored. This is particularly the case for the fraction of gas with extremely low densities, up to ~1029 times less dense than normal water, which makes its emission incredibly faint at all wavelengths and thus difficult to observe.

This is what ESA's future Athena X-ray observatory aims to do: to collect X-ray photons in order to map and build the first ever emission spectrum for the low-density gas known to lurk around galaxy clusters – located at the knots where cosmic web filaments intersect – and in filaments in general.

This image is part of a large cosmological simulation, and shows the simulated emission of X-rays (pink) and radio waves (green) for a portion of the cosmic web. The additional blue contours mark areas in which a future detection of low-density gas should be possible using both Athena and radio telescopes such as the upcoming Square Kilometer Array (SKA). The simulation took nearly two million CPU hours at the Swiss National Supercomputing Centre.