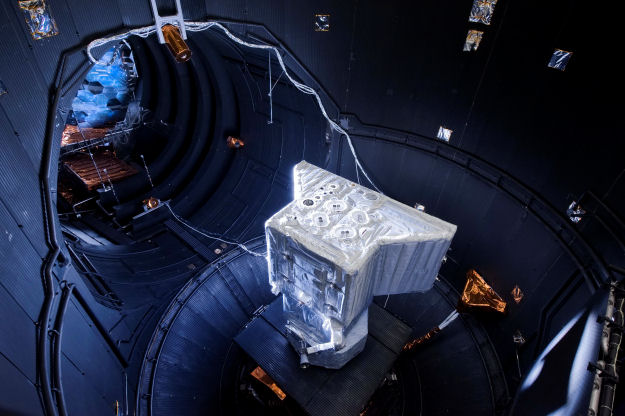 The Structural and Thermal Model (STM) of the BepiColombo Mercury Planetary Orbiter (MPO) in the Large Space Simulator (LSS) at ESA's Test Centre in Noordwijk, the Netherlands during a 'dry run' on 13 September to verify the performance of the spacecraft, its instrumentation, and the gimbal stand / spin box and levelling table that support, orient, rotate and level the spacecraft during testing. The dry run was performed in preparation for thermal-balance testing.

The gimbal stand can tilt the test article by ±30 degrees along the chamber axis.

The spin box, installed on the gimbal stand, allows the rotation of the test article and provides slip ring interfaces for the test harnesses (heaters and thermocouples).

The levelling table is installed between the spin box and the MPO Thermal Test Adapter and is used to keep the spacecraft level. This is necessary for the correct operation of the heat pipes in a one-g environment.

MPO takes a simulated trip to the innermost planet