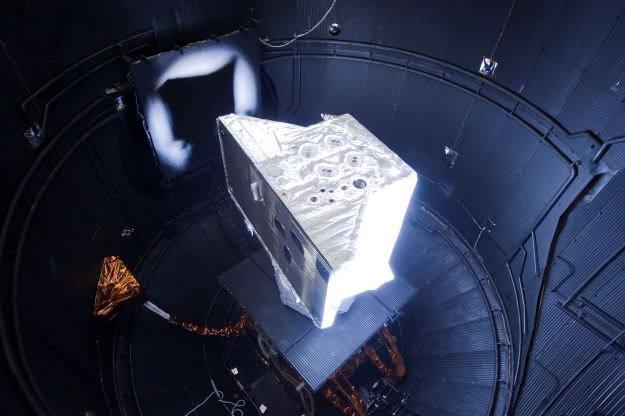 The Structural and Thermal Model (STM) of the BepiColombo Mercury Planetary Orbiter (MPO) in the Large Space Simulator (LSS) at ESA's Test Centre in Noordwijk, the Netherlands during a 'dry run' on 13 September in preparation for thermal balance testing.

The dry run was performed with the LSS top cover open; the MPO was illuminated with just one of the nineteen 25-kW lamps that make up the solar simulator. In order to reach the radiation intensity that the orbiter will experience in orbit around Mercury, the 121 hexagonal mirror segments that produce the beam have been adjusted to change from the standard parallel beam to a converging beam. To allow the wall of the LSS to cope with the increased beam intensity while continuing to simulate the cold of space, an additional shroud has been installed; this is visible behind the spacecraft.

MPO takes a simulated trip to the innermost planet