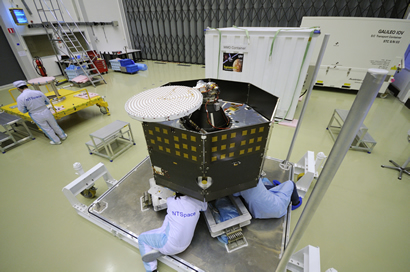 The BepiColombo Mercury Magnetospheric Orbiter (MMO) Structural Model arrives at ESA's European Space Research and Technology Centre in Noordwijk, the Netherlands. The transport container has been opened in the 'XMM' cleanroom and the internal shock recorders are being inspected on 8 November 2011 to ensure that the dynamic environment experienced by the spacecraft during transport has remained within specifications.

The circular white panel on top of the spacecraft is the MMO High Gain Antenna (HGA), which is in its stowed position and securely locked in the launch configuration; it will be deployed after launch The antenna is mounted on a pedestal (black cone on spacecraft top panel) housing a de-spin mechanism that will become active once the MMO is separated from the MPO in Mercury orbit. The MMO spacecraft will be spin stabilised, but the de-spin mechanism will keep the HGA pointing towards Earth.

The MMO is being developed and built by the Japan Aerospace Exploration Agency (JAXA).

Structural model of the BepiColombo MMO arrives at ESTEC