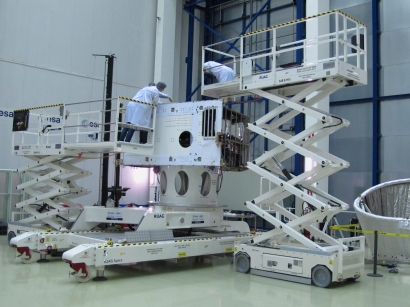 The Inter-Module Hardware (IMH) interface cups, recently removed from the Mercury Planetary Orbiter (MPO) ground handling trolley, are being mounted on the Mercury Transfer Module (MTM) Structural and Thermal Model (STM). The IMH cups are part of a cup-and-cone interface, which consists of a conical cone that fits into a matching cup and a clamp band that 'pre-loads', or pushes together, the two halves of the interface, allow the transfer of mechanical loads in all planes while permitting easy and controlled mating and separation when the clamp band is removed.