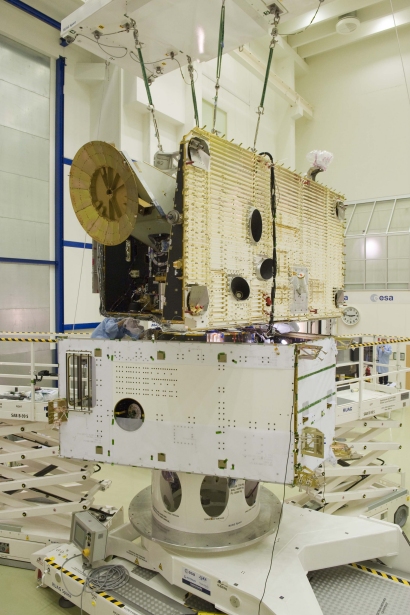 Once the two spacecraft have been mated and the alignment of the two spacecraft has been carefully checked, the bolts securing the IMH cups to the MTM will be tightened using a special tool to reach into the narrow gap between the spacecraft. The IMH cups are part of a cup-and-cone interface, which consists of a conical cone that fits into a matching cup and a clamp band that 'pre-loads', or pushes together, the two halves of the interface, allow the transfer of mechanical loads in all planes while permitting easy and controlled mating and separation when the clamp band is removed.

With the IMH cups precisely positioned on the MTM, the MPO will be removed to allow the marking-out, drilling and reaming of the holes for the shear pins.

The IMH is fixed to the MTM using bolts, but these are only designed to bear longitudinal stresses – that is, those due to forces acting perpendicular to the plane of the interface. Stresses due to lateral forces – those acting in the plane of the interface – will be borne by shear pins, since the friction between the IMH and the panels to which it is attached will be insufficient; the shear pins also increase the stiffness of the overall interface.