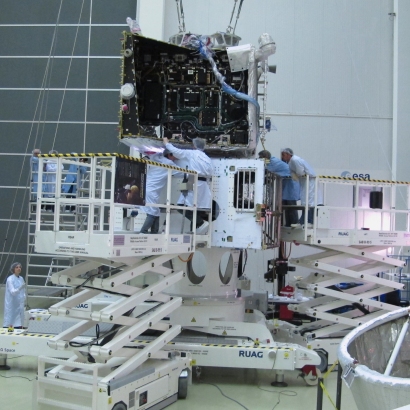 The reason for the temporary mating of the spacecraft on 11 April 2012 was to allow the precise positioning of the Inter-Module Hardware (IMH) on the MTM 'top' (–Z) panel. The IMH is fixed to the MTM using bolts, but these are only designed to bear longitudinal stresses – that is, those due to forces acting perpendicular to the plane of the interface. Stresses due to lateral forces – those acting in the plane of the interface – will be borne by 'shear pins', since the friction between the IMH and the panels to which it is attached will be insufficient; the shear pins also increase the stiffness of the overall interface. In order for the shear pins to fulfil their function of preventing slippage at the IMH/panel interface, and also to ensure that they can be removed and replaced during ground operations, very tight tolerances are specified for the size and location of the holes that they fit into. This tight tolerance for the holes in the MTM –Z panel requires that the MPO with its IMH hardware attached be used as the 'template' for determining their position.