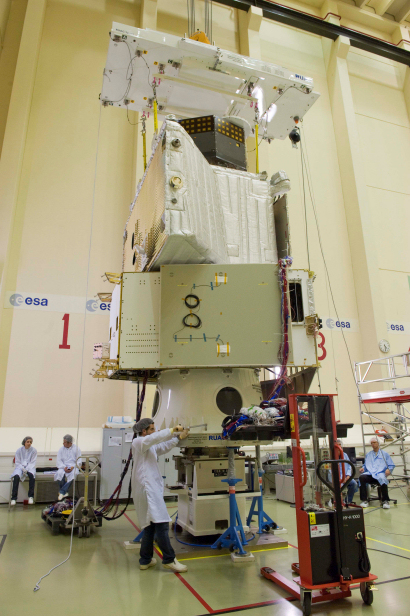 BepiColombo Mercury Composite Spacecraft (MCS) being installed on the WM50/6 test system, which was used to measure the position of the composite spacecraft CoG along the lateral (horizontal, in this configuration) axes.

The order of the components above the test system is: Physical Properties Adapter (PPA) – a circular plate that connects the Lower Handling Adapter (LHA) to the mechanical interface of the WM50/6, the LHA (white conical structure), the Mercury Transfer Module (MTM), the Mercury Planetary Orbiter (MPO), the interface adapter component of the Magnetospheric Orbiter Sunshield and Interface Structure (MOSIF) (hidden from view), and the Mercury Magnetospheric Orbiter (MMO).