Sunshield being installed on the BepiColombo Mercury Composite Spacecraft

Sunshield being installed on the BepiColombo Mercury Composite Spacecraft 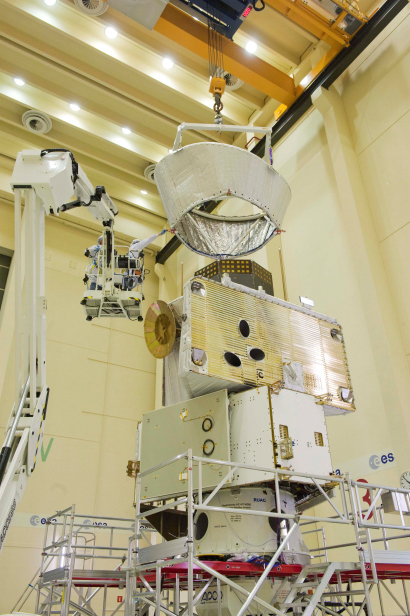 The sunshield component of the Magnetospheric Orbiter Sunshield and Interface Structure (MOSIF) being installed on the BepiColombo Mercury Composite Spacecraft (MCS).

The order of the components above the test system is: Physical Properties Adapter (PPA) – a circular plate that connects the Lower Handling Adapter (LHA) to the mechanical interface of the M80/MPMA, the LHA (white conical structure), the Mercury Transfer Module (MTM), the Mercury Planetary Orbiter (MPO), the interface adapter component of the MOSIF (hidden from view), and the Mercury Magnetospheric Orbiter (MMO).

This is the first time that the composite spacecraft structural and thermal model has been fully integrated, producing the configuration in which it will be launched and effect the transfer to Mercury. It is made up of the Structural and Thermal Models (STM) of the MTM and MPO, the Structural Model (StM) of the MMO and the Proto-Flight Model of the MOSIF.