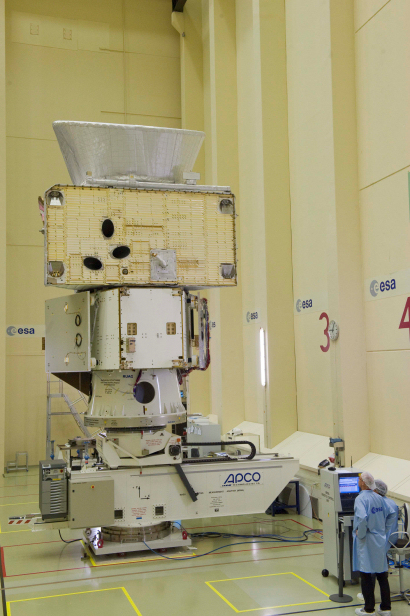 BepiColombo Mercury Composite Spacecraft (MCS) on the M80/MPMA test system, which was used to determine the position of the spacecraft CoG along its longitudinal axis and the Products of Inertia (PoI) about all axes.

This is the first time that the composite spacecraft structural and thermal model has been fully integrated, producing the configuration in which it will be launched and effect the transfer to Mercury. It is made up of the Structural and Thermal Models (STM) of the Mercury Transfer Module (MTM) and Mercury Planetary Orbiter (MPO), the Structural Model (StM) of the Mercury Magnetospheric Orbiter (MMO) and the Proto-Flight Model of the Magnetospheric Orbiter Sunshield and Interface Structure (MOSIF).