BepiColombo Mercury Composite Spacecraft being moved onto the QUAD shaker

BepiColombo Mercury Composite Spacecraft being moved onto the QUAD shaker 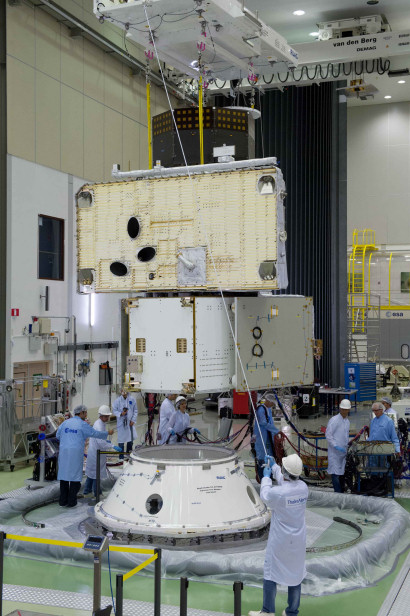 The BepiColombo Mercury Composite Spacecraft (MCS) being moved onto the QUAD shaker in the Test Centre at ESA's European Space Research and Technology Centre (ESTEC) in Noordwijk, the Netherlands. The spacecraft stack is being prepared for sinusoidal vibration testing along its Z-axis, which is vertical in both the launch and test configurations.

As was the case with previous mechanical tests, the MCS was moved from its Multi-Purpose Trolley (MPT) onto the shaker table, where its Vibration Test Adapter (VTA) had already been mounted, without the sunshield attached. This allows access to the lifting points on the Mercury Planetary Orbiter (MPO); the topmost element of the stack, the Mercury Magnetospheric Orbiter (MMO), is designed to be lifted alone, not as a structural element of the MCS stack. The sunshield was re-attached before the tests commenced.