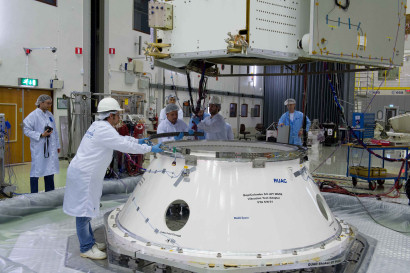 The BepiColombo Mercury Composite Spacecraft (MCS) being lowered to mate with its Vibration Test Adapter (VTA), which is already installed on the QUAD shaker in the Test Centre at ESA's European Space Research and Technology Centre (ESTEC) in Noordwijk, the Netherlands. The spacecraft stack is being prepared for sinusoidal vibration testing along its Z-axis, which is vertical in both the launch and test configurations.

The technician to the left of the VTA is positioning the clamp band that will secure the launcher interface ring (just visible inside the Mercury Transfer Module [MTM]) to the VTA. This mimics the connection between the spacecraft stack and the launcher's payload adapter.