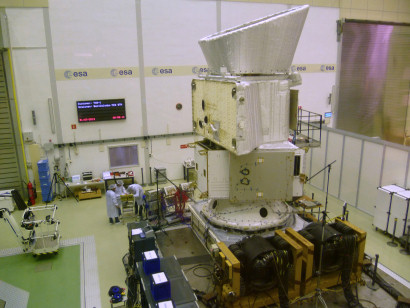 On the near face of the Mercury Transfer Module, which is at the bottom of the stack and just above the cone-shaped Vibration Test Adapter (VTA), is a mass dummy representing one of the two solar array panels in its stowed configuration. The Mercury Planetary Orbiter, in the centre of the stack, is also fitted with a mass dummy of its solar array; the edge of this is just visible at the extreme right of the spacecraft.