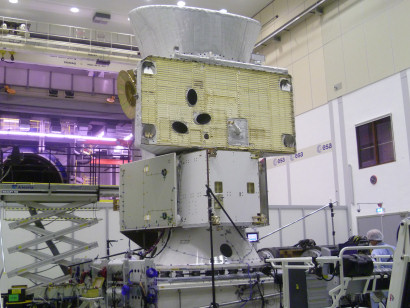 On the left facing side of the Mercury Transfer Module, which is at the bottom of the stack and just above the cone-shaped Vibration Test Adapter (VTA), is a mass dummy representing one of the two solar array panels in its stowed configuration.

On the Mercury Planetary Orbiter, which is the centre spacecraft in the stack, the mass dummy of the high-gain antenna can be seen on the left, partially concealed behind the radiator used to reject heat from the orbiter's internal systems to cold space and the titanium louvres that will reflect away infrared radiation coming from the surface of Mercury.